based on "the image of the city" by Kevin Lynch

Building and Urban Design in Development

"Nodes are points, the strategic spots in a city into which an observer can enter, and which are the intensive foci to and from he is traveling. They may be primarily junctions, places of a break in transportation, a crossing or convergence of path, moments of shift from one structure to another. Or the nodes may be simply concentrations [...]. Some of this concentration nodes are the focus and epitome of a district, over which the influence radiates and of which they stand as a symbol. They may be called cores. The concept of node is related to the concept of paths, events on the journey." 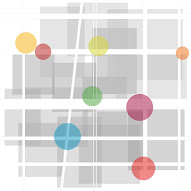 Nodes are events where the elements joint and work all together in order to create an organic an active system of cooperation.

The Practical scenario has a different type of node.
The node is the focus of a district, usually an issue that a group of stakeholder is facing and fighting. On this node, there is a concentration of programs; actors; tensions between experiences and policy(ex: legitimation, etc.), flexibility and negotiation and so on.

In the moment where the academic scenario meets the real-life scenario they generate so-called 'nodes'.
The 'districts' of theory and practice during almost all the academic period run parallel creating mainly edges of misconceptions.
It is at the moment that they meet a structured program (path) as the BUDDcamp or BUDDfiledtrip that these edges become nodes. It is the moment of transition|shift from active outsider (student) to active insider (practitioner).

The image   f the