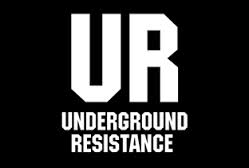 Underground Resistance is a label for a movement. A movement that wants change by sonic revolution. We urge you to join the resistance and help us combat the mediocre audio and visual programming that is being fed to the inhabitants of Earth, this programming is stagnating the minds of the people; building a wall between races and preventing world peace. It is this wall we are going to smash. By using the untapped energy potential of sound we are going to destroy this wall much the same as certain frequencies shatter glass. Techno is a music based in experimentation; it is music for the future of the human race. Without this music there will be no peace, no love, no vision. By simply communicating through sound, techno has brought people of all different nationalities together under one roof to enjoy themselves. Isn't it obvious that music and dance are the keys to the universe? So called primitive animals and tribal humans have known this for thousands of years! We urge all brothers and sisters of the underground to create and transmit their tones and frequencies no matter how so called primitive their equipment may be. Transmit these tones and wreak havoc on the programmers!

We're not accepting any demos at this time.

Want to book a show?: booking@alteregomgt.com