In 1975 there were only 15 mature palms alive on the island. In 1996 only 2 of these survived although the seed bank provided enough seeds for regeneration once after the eradication of the herbivores. There are now many mature trees producing fruit. 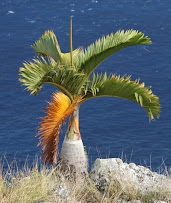 This palm has been reduced to one individual on the island and it is the only wild one of this variety. There are some young palms propagated from this palm growing in a nursery with ideas to introduce them to the island in the future.

Currently the most abundant palm species on the island which provides habitat for many of the island's fauna. Boas can be seen at night moving across the fronds while skinks scavenge under the leaf litter.

Not strictly a palm, this plant forms a large broad canopy and is accessible inside providing welcome shade from the midday sun. The plant produces large fruit with many seeds that the tortoises and Telfair's are spreading around the island. 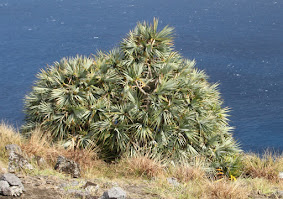 The few remaining individuals of this small shrub provided evidence for where the hardwood forest was situated on the island. The plant now thrives and is found seeding regularly. 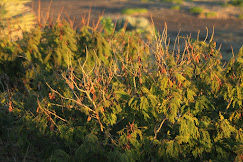 Round Island has the last remaining example of a palm-rich forest in Mauritius which would have once covered the entire north coast of the country. Tortoises would have created open areas within the forest which is now very dense thickets of Blue Latan.

Most of palm populations regenerated rapidly after the herbivores were removed and now cover large areas especially on the western slopes.

A few individuals of native hardwood tree species survived the goats and rabbits and as a a result of intensive replanting are abundant on the island once again.

There are also some very rare herbs that exist nowhere else except Round Island and are being propagated to secure a population for the future. 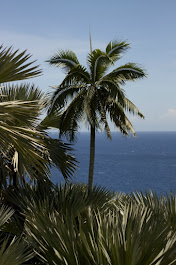 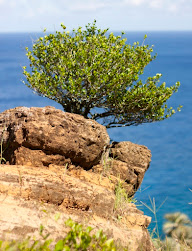 One the remaining hardwood trees that survived. The natural bonsai tree grows on top of a rock so the goats could not reach it. 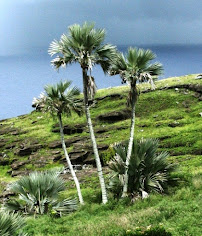