Q: What is Quadrophonic News?

A: Quadrophonic News is a music newspaper published at Bard High School Early College that prints articles written by students about music.

Q: How do I submit to Quadrophonic News?

A: Write an article and send it to quadrophonicnewsbhsec@gmail.com and we will take care of the rest. We may email you back if we have some corrections or suggestions, but don't let that discourage you, we just want you to sound your best!

Q: What are the qualifications of writing an article?

A: We recommend that articles are around 500-1200 words. You can include a picture if you'd like. The one thing we really stress is that you put quotations ("") around song names, italicize album names (as such) and capitalize band names. For example, I've been listening to "Blue Moon" on Beck's new album Morning Phase.

Q: If I have a question about something, who do I ask?

A: Email us, at quadrophonicnewsbhsec@gmail.com if you have any questions.

Q: I want to write something, but I have no idea what to write, what do I do?

A: Again, email us at quadrophonicnewsbhsec@gmail.com and we will send you some ideas to inspire you!

A: Quadrophonic News is usually released every 2 months, unless we are either feeling very energetic (1 month) or very lazy (3 months).

Q: Where can I pick up a copy?

Q: Why are you called Quadrophonic News?

A: We're glad you asked! This is an excerpt of the wikipedia page on Quadrophonic Sound, explaining a basic summary of what it is:

"Quadrophonic sound similar to what is now called 4.0 surround sound – uses four channels in which speakers are positioned at the four corners of the listening space, reproducing signals that are (wholly or in part) independent of one another. Quadraphonic audio was the earliest consumer product in surround sound. It was a commercial failure due to many technical problems and format incompatibilities. Quadraphonic audio formats were more expensive to produce than standard two-channel stereo. Playback required additional speakers and specially designed decoders and amplifiers."

We hope that explains it. If not, read on at http://en.wikipedia.org/wiki/Quadraphonic_sound 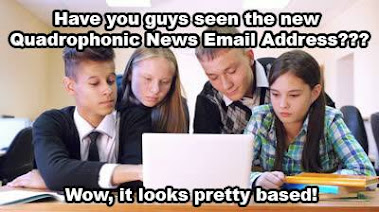 Thanks To Eugene Varnedoe 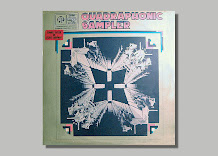 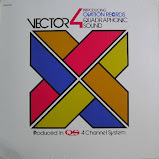 Some Trendy Quadrophonic Covers From "Back In The Day"

Check Out This Year's Quaddys Winners