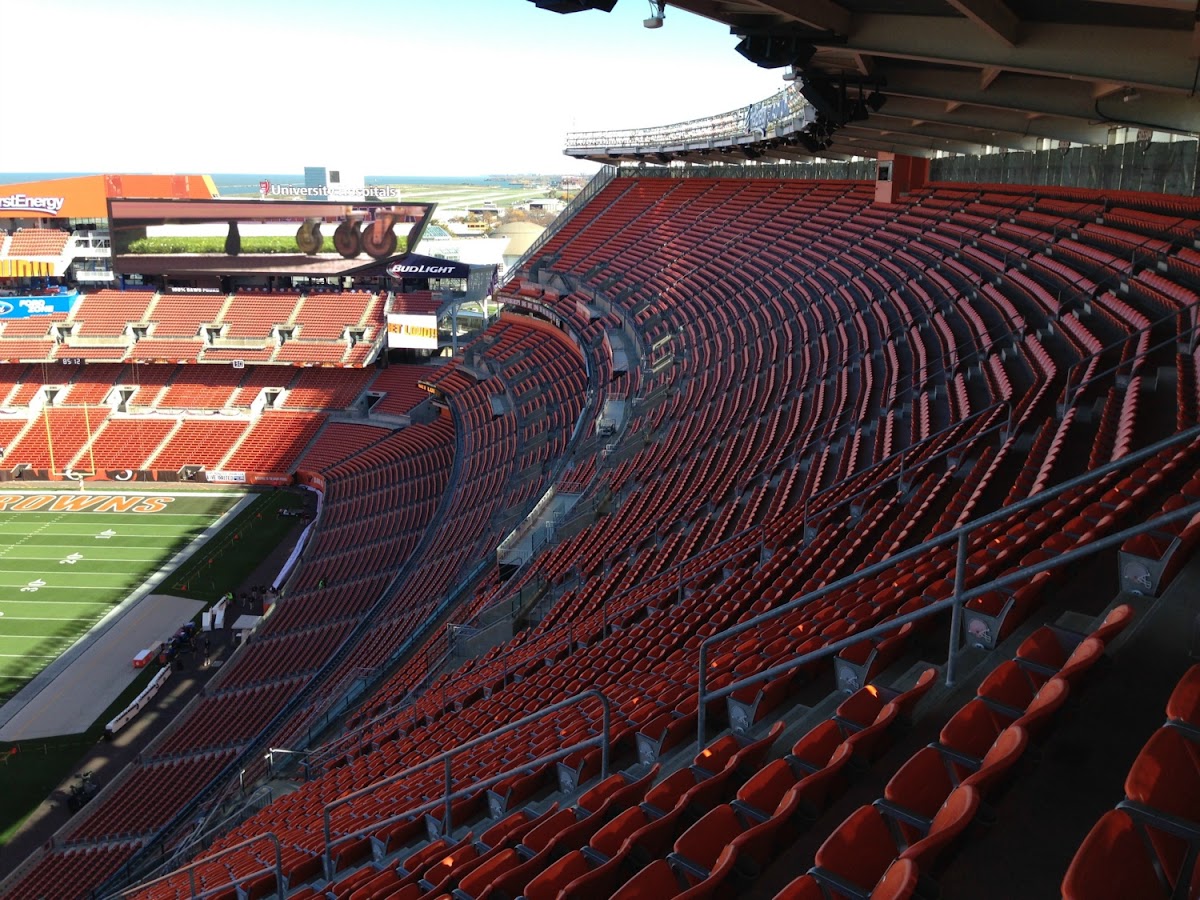 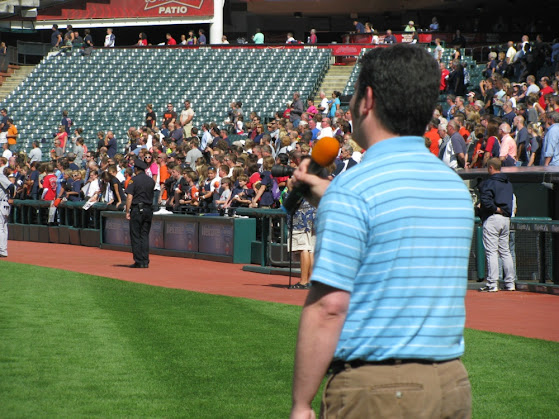 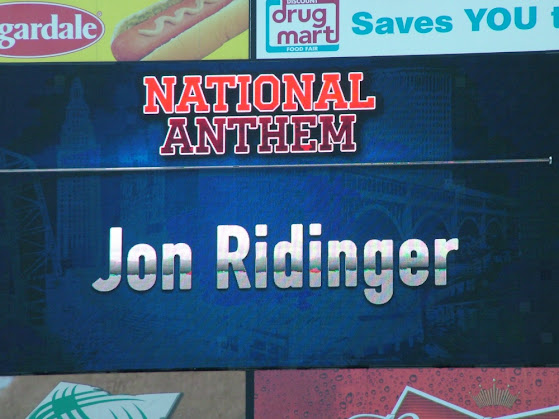 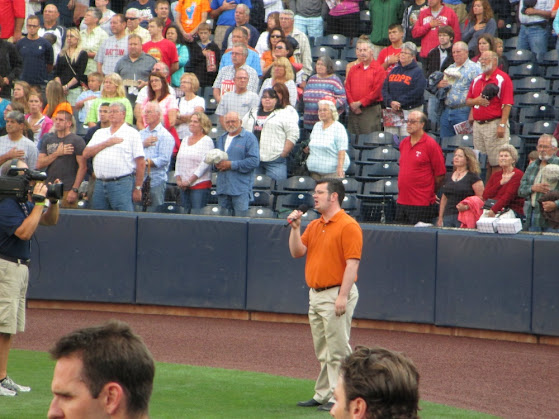 Jon has been fascinated with our National Anthem as long as he can remember. Back in 1991, when he was almost 9, he remembers hearing Whitney Houston perform it for Super Bowl XXV, a rendition which still ranks among the best ever. It influenced his own "style" of singing it at the time and led to his first public performance of the anthem, singing for his 5th grade class at Walls Elementary School during the 1991-92 school year as part of music class.

During middle school Jon always had hopes of singing the anthem for something like a Major League Baseball game, but it never happened. He finally made his debut at a sporting event on Valentines Day in 1998, his sophomore year, singing for a boys basketball game at Roosevelt High School in Kent, Ohio. The rest of his time in high school, he sang for multiple sports. Jon's motivation for singing was not only his enjoyment of singing and the anthem itself, but also his dislike of the generic recording which had been used up to that point.

Need a National Anthem performer? Look no further. Jon has been performing the Star-Spangled Banner for over 15 years in dozens of venues, from local and high school events to college and professional sports. Additionally, he is familiar with the anthems of several other countries.

Audiences tend to prefer a traditional, straight-forward rendition of the anthem with a moderate tempo and typically prefer a singer over a band. Jon's rendition of the Star-Spangled Banner typically lasts about 83 seconds (1 minute, 23 seconds). Listeners typically compliment him on his traditional style and moderate tempo. Below you can find his background in performing the anthem as well as recordings and videos from several of his performances over the years.

After a break mainly due to serving a mission to Arizona and New Mexico, he finally returned to performing by singing at a high school in Utah that he had some friends at. That's a story in itself!

Jon really started performing the anthem again regularly in late 2007 when he returned to Kent State after spending most of the years from 2004-early 2007 out at BYU-Idaho. Following his return to Kent, he started singing for both the KSU men's and women's basketball teams regularly, plus he was able to sing for the men's and women's basketball teams at Lake Erie College in Painesville, Ohio, as he had a friend playing on the women's team at the time and, once again, he simply asked if they wanted and needed an anthem performer. They liked it so well they asked him to come to every game he possibly could.  During the 2007-08 winter sports season, Jon performed upwards of 20 times between KSU and Lake Erie College, including for KSU's club ice hockey team.

Jon made his Canadian anthem debut in 2014, performing "O Canada" at the NCAA Division II Wrestling National Championships in Cleveland at historic Public Hall. He still performs for KSU athletics regularly. Most recently, he has performed at or is scheduled for several athletic events in 2014-15, including football, men's basketball, women's basketball, volleyball, wrestling, and gymnastics, and has been singing at various KSU athletic events every season since 2007.

Since middle school Jon had always wanted to sing the anthem for a Cleveland Indians game, but either couldn't get a decent recording done at all, or just sent it in way too late. Finally, in 2010, he got a recording done, got CDs, and mailed them out to several baseball teams. Only the Akron Aeros, the AA affiliate of the Indians, responded as he sent them out just a tad too late.  Jon ended up making his pro sports debut on July 5, 2010 at Canal Park in Akron, Ohio.

The next year he sent out the recordings a month earlier and finally got the long-awaited call from the Indians! Jon sang for them the first time on April 9, 2011 in a game against Boston. It was about 38 degrees and the attendance that night at Progressive Field was just over 9,000. A few days later, he performed for the Aeros again on Good Friday with the temperature not a whole lot warmer and a steady drizzle in the wind. He sang anyway in front of maybe 50 people that afternoon, and the game ended up being called for rain in the 3rd inning. Jon was able to sing for the Indians again in 2011 when he was asked to sing for a game in September that had been rescheduled.

In 2012, he was again asked to sing for the Indians and the game he was scheduled for was delayed by rain for two and a half hours. During the delay, Jon told the intern that if an anthem performer ever canceled, he (Jon) could perform on relatively short notice. Jon figured he might get called back maybe once more that season, but ended up coming back four more times that season, singing in May, June, August, and September.

Jon sang for the Indians in May 2013 and was actually scheduled to sing for them again in the event they hosted a tie-breaker game to settle one of the wild card spots. While that didn't end up happening, he did, however, get to perform for the Akron Aeros again in May, as well as two AAA teams: the Columbus Clippers in April and the Toledo Mud Hens in July. In November, Jon sang at Quicken Loans Arena in Cleveland for the Lake Erie Monsters of the American Hockey League, the top minor league affiliate of the Colorado Avalanche of the NHL. He had return appearances in 2014 for the Indians, Mud Hens, Clippers, and Rubber Ducks (formerly the Aeros). 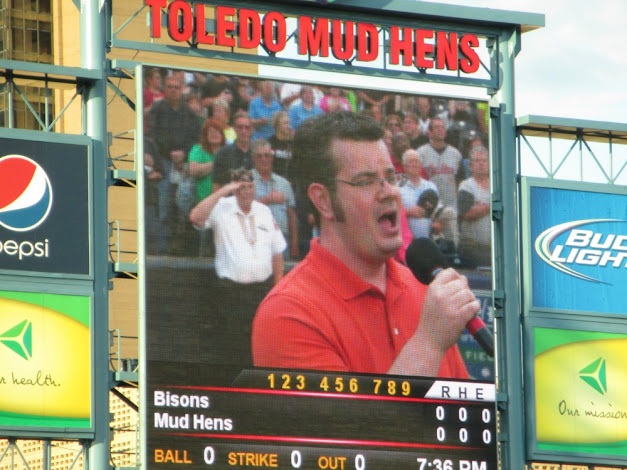 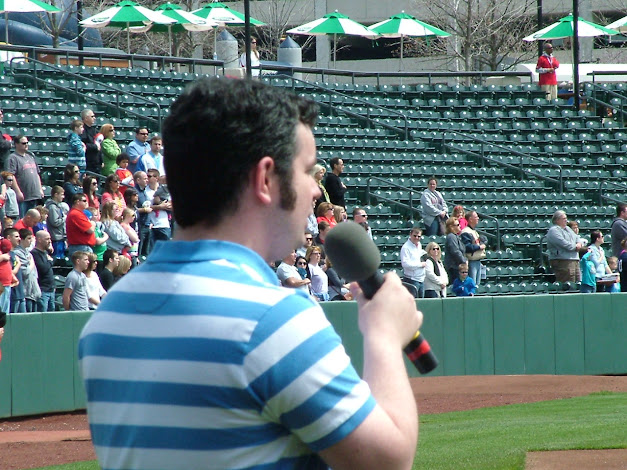 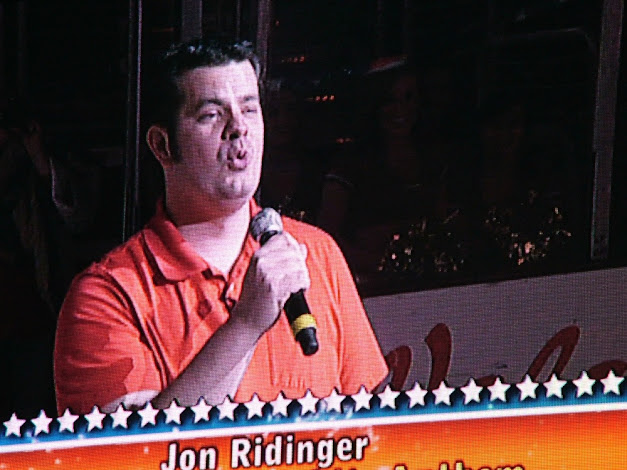 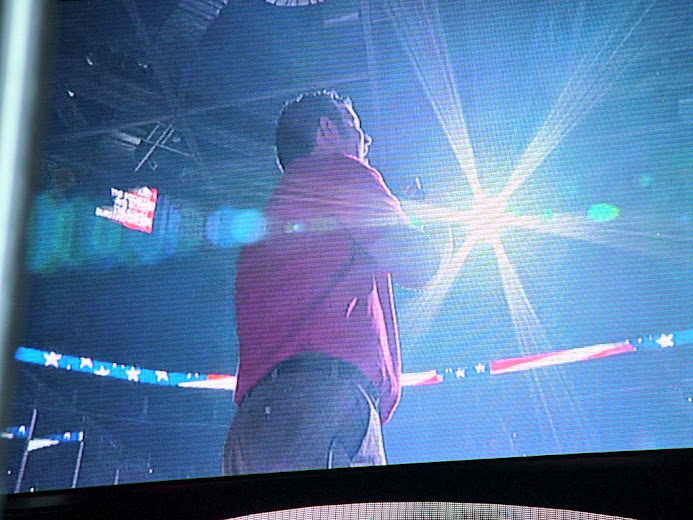 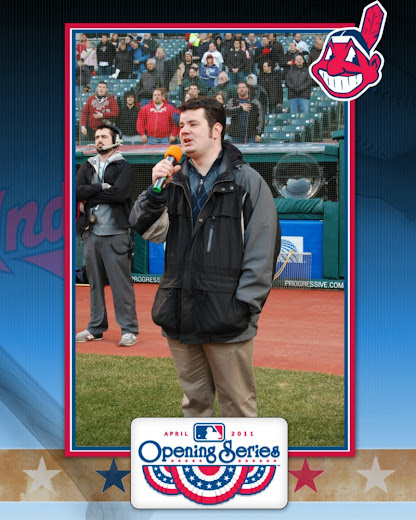 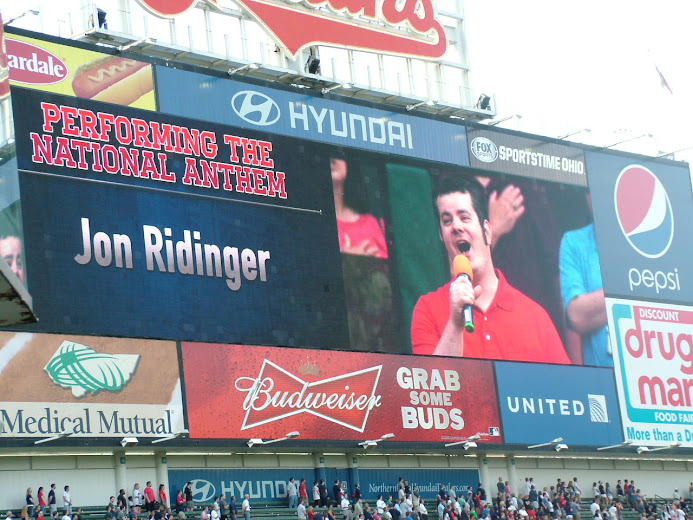 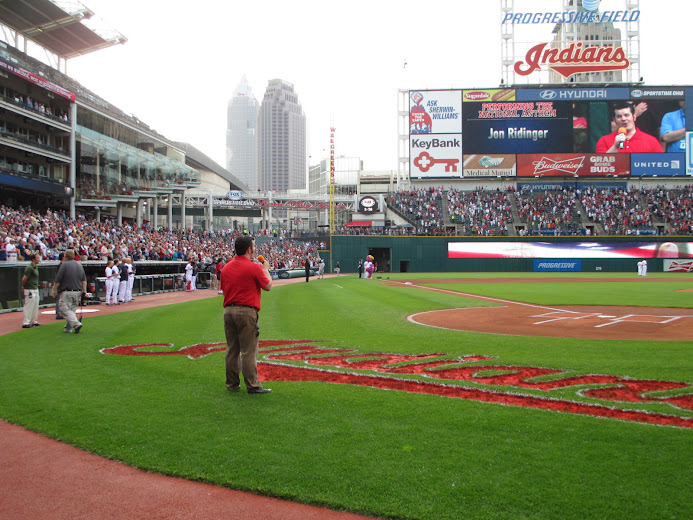 Another tremendous rendition of the Star Spangled Banner by @jonridinger at the MAC Centre tonight. No one has ever done it better.